Sephira (, Sephira?) is a recurring non-playable monster from Romancing SaGa 2. In recent versions within the series, she has been made into a playable character.

Sephira appears as an obtainable character. The regular styles are are obtainable as gacha units from the regular gacha pool. The Halloween-themed style of Sephira was exclusive to the Halloween event. 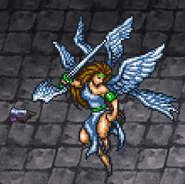 Enemy sprite.
Add a photo to this gallery

Retrieved from "https://saga.fandom.com/wiki/Sephira?oldid=36362"
Community content is available under CC-BY-SA unless otherwise noted.