Sigfrei (シグフレイ, Shigufurei?) is a character from SaGa Scarlet Grace. Once the former governor of Provincia Kei, Sigfrei's countless atrocities made him earn an execution sentence. However, before the execution order was complied Sigfrei told his executioner that he would "return seven times to spread justice over the world". As unexpected, Sigfrei had indeed returned some time after his death.

Sigfrei is depicted as a young blonde haired man clad in a green armor wearing what appears to be a robe under said armor. A notable difference between his in-game counterpart and his artwork depiction is that in-game the robe appears to be a suit instead. In combat he's usually seen wielding a Quarterstaff.

Hinting at his true identity Sigfrei is a man who enjoys tricking people but also likes in part spread crucial truth within his lies. He also appears to be a rather cunning individual who constantly keeps track of the people that catch his interest

Sigfrei is found in several points within the world in Urpina's story. Initially he can be found in Cerenaif where he's seen disguised as a priest preaching to the people that the sudden appearance of giant shrooms across the region means the final days are coming and that the world is soon coming to an end. Upon exposed about his fraud he reacts surprised to seeing how Urpina could see through his scheme but promptly gets beaten up by Urpina and her retinue. Sigfrei manages to escape after a while, leaving Urpina wierded about the man's true intentions. After the incident Urpina is able to feel his uneasing presence in any region he's present. He can be found in Bicyniro where he's seen summoning fiends near Pescara to attack nearby towns. He can be found in Normi where he's seen spreading false rumors of fiends nearing the towns of Westdorf and Ostdorf that are actually guardian Spirituals of the region.

Sigfrei is encountered by Leonard and Elisabeth. Upon visiting Balmaint, Balmaint comments on the fact that he just executed Sigfrei. Leonard refutes him by saying that Sigfrei is alive. Balmaint joins Leonard's retinue to find out the truth.

Sigfrei is battled several times across all character's stories. He's usually seen accompanied by two monsters of varying type according to the engagement (frogs, goblin-like monsters, hogs). In combat Sigfrei is totally invulnerable to physical attacks unless he's casting one of his spells (Snowstorm, Call Lightning, Churning Earth) and depending on the battle he also has access to Blunt and Pierce interrupt techniques. Usually he shouldn't be a problem unless he's casting Snowstorm, which in combination with his high Intelligence and the low cast time of the spell, usually results in massive damage if not outright anihilation of the whole retinue. The player should focus on defeating Sigfrei's monsters and try to aim for a United Attack and when he's casting a spell try to stun him using techs with high stunning rates such as Tumble. Another easy tactic for defeating him involves bringing atleast two club users, as this weapon in particular with its default attack can be used to easily distract him while he's casting a spell.

Sigfrei appears as an enemy character. 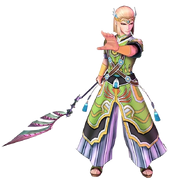 Sprite from the Playstation and steam achievements