T260G (T260G, Ti Ni Roku Maru Ji?) is one of the main protagonists in SaGa Frontier. This highly sophisticated robot was constructed from readily available components and a core found buried at a mysterious crash site. Extremely intelligent and physically strong, it had an important mission. But due to damage, the nature of this mission has been lost. T260G will jouney to recover its function and to accomplish its forgotten directive.

Starting out in the town of Junk, T260G teams up with Gen to rescue a boy named Thyme from the Caballero hideout.

There are four areas T260G is able to access at the start of his adventure: the Crater, the Port, the town of Junk and the Combat Arena, where it is able to partake in a series of battles to earn credits and scrap parts.

Taco, an anthropomorphic octopus who is a friend to Thyme and his sister Rose, takes whatever pieces of scrap T260G finds and upgrades them into weapons, armor or items which can then be equipped.

After Thyme is rescued, T260G and Gen travel to the town of Scrap, where they are joined by Riki and Mei-ling. The band of adventurers proceed to the Caballero factory, encounter Lute (who joins the party) and finally confront Caballero himself.

T260 joins Lute and Blue if either of them speak to it in the pub in Scrap. T260 does not join Red, Emelia, or Asellus.

T260G appears as an obtainable character.

T260G appears as an obtainable card. 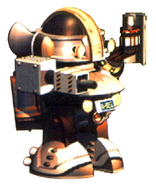