"A powerful witch who was once a likely candidate for the next Arch Witch. Disgusted by the idea of taking such a mantle, Taria abandoned the arcane to pursue the path of pottery."
—In-game description
This article is a stub. You can help SaGa Wiki by expanding it.

Taria, a potter residing in Provincia Termina, finds one day her work has been experiencing some sudden sort of warping which leaves her rather unpleased and thus departs to find the possible cause of the warping. A day like any other she witnesses the legendary Sublime Spiritual of ignis, the Phoenix, flying from Provincia Thracini and laying rest within the woods of Termina. She deduces the sudden appearance of the Spiritual might be linked to her pottery's warping. Before trying to get near the flaming bird she encounters a wandering adventurer resting in a nearby town. His name is Kahn and some days ago he was working as the imperial guard of the empress of the recently founded Eastern Imperium of Thracini. He saw the Phoenix as well and got interested in getting at least one of its feathers to make some quick cash. Taria tells him that to handle said feathers one must do it a proper way or else those will simply vanish like ashes. Kahn then offers her to work together to which Taria happily agrees. Both then depart from town alongside Kahn's mercenary band, the Killers, to capture a Phoenix feather. Upon encountering the Phoenix they find the bird has lost its fiery glimmer and is easily slain in combat. The group get a feather but Kahn is left wondering why the Phoenix would be that weak if it was supposed to be a Sublime Spiritual to which Taria says the Phoenix might have been nearing the end of its life cycle and that before dying it should have laid an egg somewhere. Kahn is surprised of hearing this and wants to find the egg as it might fetch for a lot. Taria as well wants to find the egg as it might have something to do with her work's warping. Both then depart from Termina using the feather's stored memories as guide for finding the whereabouts of the egg.

The feather eventually guides them to the Southeastern Boundary where the Phoenix has laid its egg on a faraway islet. However, they find themselves in need of a ship to reach the nest. The group returns to a nearby town in Marchiam Bicyniro where they're approached by a woman named Kumi who offers her help in exchange for some of the eventual profit. Taria agrees and lets her into the retinue. The group departs on the ship but find another dead-end in the Maelstrom near the Boundary seas. Kumi says that to proceed they need to get the favor of the Celestials and so Taria and her group are forced to travel to Provincia Yaxart, the region with many shrines dedicated to the Celestials, to begin a pilgrimage and possibly get the needed favor. On the way to Yaxart the group experiences many odd events such as the sudden rise of monster numbers or alterations in the behaviour of people. Taria thinks all of this could be related to her work's warping and that the Phoenix's waning Spiritual energies could be linked to these events.

Having finished the pilgrimage in Yaxart the group then hastily returns to Bicyniro to attempt crossing the Maelstrom. Without much trouble the group crosses the Maelstrom and make their way to the island where the egg was stationed. Kahn mentions the size of the egg could be a problem for transporting it. Nonetheless, the group is happy to have finished their objective and try to move the egg to Kumi's ship. Suddenly the egg begins to crack and the Phoenix's chick emerges from it. The chick tries "attacking" the group but in reality uses them as help for gathering the ignis energies of the egg's shell. After a while of "fighting" the chick amasses enough energies and grows once again into the legendary Phoenix. The chick departs leaving Taria's group devastated, especially Kahn. Kahn wonders about how to feel after such adventure while Taria tells him whether egg or not in possession he should feel honored that the Phoenix chose him as helper for its resurrection. Without egg the group returns to Termina with Taria being eager to test the new results of her pottery now that the Phoenix has vanished.

Depending on the choices made while taking the quiz, her stats may change. If recruited in another character's scenario, her stats will be the leftmost ones on the chart above.

Taria appears as an obtainable character. 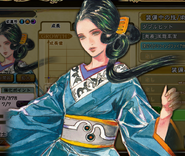 Taria appears on a banner. 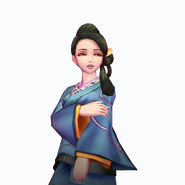 Sprite of Taria from the Playstation and steam achievements.