Tatyana Rzhyev (タチアナ・ラザイエフ, Tachiana Razaiefu?) is a character from Romancing SaGa 3. She is the missing heir to the Rzhyev House of Ryblov and wanders around various towns. She does not want to return to Ryblov as she is hiding from there which is why when recruited her name is always different.

Tatyana wears her long red hair in three buns. Her hair is tied up with blue ribbons. She has red eyes. She wears a black star-shaped earring. She wears a cloak patterned with orange and red diamonds throughout. She wears yellow pants and brown boots. She carries a black bag with a black star on it and a black and white teddy bear.

Although at times, Tatyana can seem childish, it is due to denying the harsh reality behind her circumstances. From the small talk she has with the player character, it can be seen that she is lonely as she claims she has no friends.

Tatyana used to be a more jovial person, right until she found out she was going to be murdered by her siblings. Since that fateful day, she has maintained a secretive disposition and utters her disgust at coming back to Ryblov. The trepidation of confronting her siblings about the plot troubles her so much that she leaves the player character's party the moment they set foot into her hometown.

Prior to the events of the story, Tatyana was born to the Rzhyev family. Tatyana lives with her father, Alexei Rzhyev and her siblings, Nikolai, Vera and Boris. Tatyana ran away from home, leading many to ponder about the lack of an apparent heir for the Rzhyev family.

"Why do I have so many nicknames...? ...So that I never forget what happened that day. My favorite sweets... On a very special day... And then... My family that I loved... I thought they felt the same way. But they didn't... I was just in the way... It was only pure dumb luck that I found out. But once I knew... I had to run away from home."
—Tatyana revealing her reason for running away

It is revealed in the Phantom Maze that Tatyana had actually run away to save herself. She mentions that she has many nicknames to remind herself of the day she decided to run away. On her birthday, Tatyana had come home to a feast comprised mostly of her favorite desserts, echoing the many aliases she uses to hide her identity from the player character. Excited by the banquet, she is interrupted by the sound of people shuffling into the room.

Tatyana hides under the table and listens to her brother and sister discussing their future. Vera and Boris mention that their oldest brother Nikolai will inherit the store however Tatyana will inherit their home. They state that she is their father's favorite, much to their chagrin. Tatyana overhears the duo plotting to poison her with a drink that will take effect during her bedtime and inevitably kill her in the morning.

The player character gets the choice to confront Tatyana's siblings, with the two denying that they tried to murder their sister. Tatyana pushes them to tell the truth, with Tatyana's father coming upstairs and wondering what the commotion is about. The duo continue to deny her claims until they become a visage in which the party must fight.

Following the battle with a Taotie, Tatyana dares her siblings to eat the food that they have poisoned. The duo being reluctant to touch the food, are told by their shocked father to leave the city and never come back. After her siblings leave, Tatyana's father talks about granting her a ring she's always wanted. He states that they will continue to celebrate her birthday. After the illusion fades, Tatyana wishes she was able to tell her father the truth, finding the physical embodiment of her father's love for her, the Mage Ring, in her hands.

Tatyana starts off with a foil, she is a decent magic user. As an heir to a weapons store, Tatyana is nothing new when it comes to fighting and she is very talented with spears and epees.

She always carries her teddy bear with her, and it is an item she has that cannot be removed; it offers a small amount of protection from cold-based attacks. However due to it locking up an equipment slot, she may be a liability due to that and that heading to her hometown will cause her to leave. It is up to the player if they wish to recruit her but if one wants a foil/epee user as early as possible with little to no restrictions on recruitment, she is a solid candidate.

If Mikhail is the main character, she cannot be recruited.

Tatyana appeared as an obtainable character.

Tatyana appears as an obtainable character. 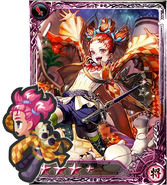 This version is only found in the story.

This version is available exclusively in the Christmas gacha pool.

Tatyana appears as an obtainable card.