Undine (ウンディーネ, Undīne?) is a character from Romancing SaGa 3. She is an optional playable character. She can be found during the water abyss gate quest and is in the southwest end of Moses. She is the leader of the water mages there and is in constant conflict with the fire mage Volcano and his fire mages.

Undine can be recruited once you agree to both her and Volcano`s request to kill the other then after head down into the Dead Man`s Well and get the treasure down there and complete that quest once you exit Undine and Volcano will be present angered at the player character and will temporarily work as a team to fight you. After their defeat Undine will be able to be gotten, She specializes in water magic and is one of the best users of water magic in the entire game and even though she has the lowest strength stat in the game one can give her bows as a second weapon as she will be very good with them due to high dexterity.

Out of all the characters who have a higher pre-disposition towards magic usage, she has the lowest LP out of them all but the highest Intelligence stat. She is better off on the rear lines as support with magic and bow usage. Give her Super Gravity so she can help deal damage when the party is in good shape and not in the need of healing if going for a full magic crown. Her predisposition to water magic means she would have to use earth magic instead to cover the healing aspect if the player is intent on giving her revive. Her best role is support than full offense due to her lower than normal LP amount. Giving her weapon and certain evasion techs may be best if you choose only a few spells to work with.

Undine appeared as an obtainable character.

Undine appears as an obtainable character.

Undine appears as an obtainable character.

Undine appears as an obtainable card. 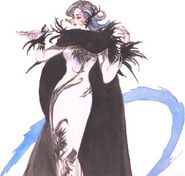 Undine`s sprite as an enemy.