Victor (ヴィクトール, Vikutōru?) is a character from Romancing SaGa 2. He is a minor non-playable character. He is the older brother of Gerard and son of Leon.

Victor is depicted as a young man with short and blond wavy hair that is slicked upwards. He is often seen wearing his signature golden armor and sometimes wearing a blue cape.

In an alternate depiction, Victor is depicted similarly except he has brown hair and wears a silver suit of armor. He still wears his blue cape.

In the manga, Victor's hair is styled and he wears an armor with a cape. His appearance closely reflects the appearance of his sprite.

Victor, like his brother Gerard, is kind and caring. He has also been described in the Time Weaver artbook as brave.

Victor was next in line to being ruler over Avalon, but after Leon left to the Watchman Cave and came back, Avalon was attacked and Victor was killed by Kzinssie, who had used Soulsteal on him. Victor tried to fight but all his attacks were useless.

In the remakes of the game, the player is given a chance to spar with his spirit after unlocking every region and all classes.

The battle with Victor is a duel between him and the current ruler. Victor primarily uses physical techs like Stream Blade and Surging Slice to deal heavy damage to the player. Having Sword Barrier and Revive is a must as Victor can cut a character down within two turns. While Sword Barrier will nullify most of his attacks, Victor is capable of performing Fusion magic as well so Revive is necessary.

Defeating Victor will leave a chest with an Intaglio Ring near the Emperor's bed when he wakes up the next morning.

Victor appears as an obtainable character.

Victor appears as an obtainable character. He is a playable level 3/5 character. 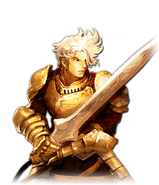 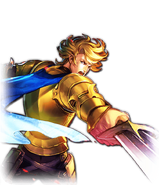 Victor appears as an obtainable character. The regular versions of Victor are obtainable as gacha units from the regular gacha pool. The alternate S-rank version of Victor was available at an increased rate during the Kzinssie Recruit event.

Victor appears as an obtainable card. 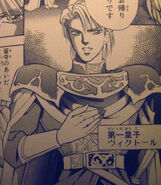 Victor as depicted in the Romancing SaGa 2 manga