Wagnas has been characterized as preferring to use brute force over sophisticated machinations. This lies in stark contrast to his best friend, Noel, who prefers diplomacy.

Prior to the events of the game, Wagnas along with the other Seven Heroes were once human and had lived in the Forgotten Village.

Wagnas also has the distinction of being the only Seven Hero who uses no physical attacks at all. His Signature Move is the Psycho Bind. All of his attacks, in fact, are heat based or status based. In this instance, players will have a significantly easier time fighting him if the party is equiped with items that can increase fire defense or mind defense. (The four elementals such as the Moleman or Nereid, incidentally, are ideal candidates for this very reason) The Court Mage also serves a good purpose in fighting him as their armor gives them protection from all magic elements.

Wagnas appears as an obtainable character.

The leader of the Seven Heroes, is not the best of them, as hr is an caster type and since Light Magic isn't good compared to Shadow Magic, as Sun Blast isn't powerful as Vermilion Sand.

Wagnas appears as an obtainable card.

Wagnas appears as an enemy boss.

Rocbouquet appeared as an obtainable character.

Wagnas and the rest of the Seven Heroes appeared as summonable units in Lord of Vermilion (ロード・オブ・ヴァーミリオン Rōdo obu Vāmirion), an arcade-based trading card game series developed by Think Garage and distributed by Square Enix. Physical collectable trading cards enabled players to summon and control characters in the game via interactive play surface. For the SaGa series characters, these cards included short narratives and other trivia, providing fans with an insight into a character's personality and background where it may have otherwise been absent in the original games. 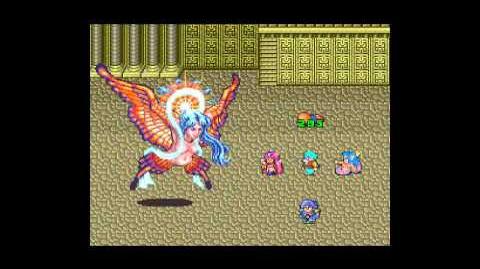 Wagnas (First Form)
An example of a battle with Wagnas in his first form. 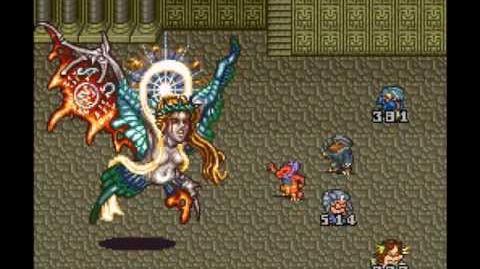 Romancing Saga 2 Battle With Wagnas 2nd Form
An example of a battle with Wagnas in his second form.

Retrieved from "https://saga.fandom.com/wiki/Wagnas?oldid=30873"
Community content is available under CC-BY-SA unless otherwise noted.